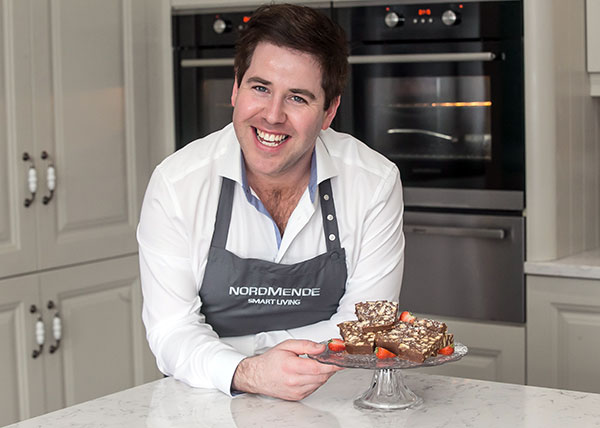 Edward Hayden, the young Irish chef and food writer/blogger – who is a regular on TV3 with his popular cookery slots on Ireland AM – has just become a brand ambassador for NordMende.

Hayden is a regular cookery columnist in Woman's Way and his recipes and cookery features have appeared in various national publications, including the Irish Independent, The Irish Times, The Sunday World and Food & Wine Magazine. A Kilkenny native, Hayden self-published his first cookbook, Edward Entertains, in 2008. His two follow-ups, Food to Love (2011) and the Top 10 Irish best-seller, Food for Friends (2013) were published by The O’Brien Press. In addition to his media and writing commitments,

Hayden works as a culinary lecturer at Waterford Institute of Technology, regularly lectures in An Grianán, the Irish Countrywomen’s Association Adult Education Centre, and runs his own cookery school in his native Graiguenamanagh. He recently completed a nationwide culinary tour of Ireland, giving cookery demonstrations at a variety of locations. Hayden initially trained in professional cookery at Waterford Institute of technology, before completing a Bachelor of Arts in Advanced Culinary Arts at Cork Institute of Technology. He recently graduated with a Master’s Degree in Learning & Teaching in Higher & Third Level Education.